Daniel’s earliest recollections growing up were of a brick and tile house in the suburb of Holland Park Brisbane.  The house and the block it was located on were small.  There was a small front verandah leading to a central hallway. On the right side of the  hallway was a  dining room that opened onto a lounge room, on the other side were bedrooms. There was also a bathroom and the toilet was outside.

This period was the time of the horse, deliveries were al by horse drawn vehicles. Dan the grocer called every week to collect his order which he delivered later taht day and milk and bread were delivered every morning.  Fruit came on a large horse drawn barrow, so did supplies firewood and ice.

Daniel’s family was not well off, nevertheless he had a happy home life.  Daniel Croke’s mother was a wonderfull woman who loved her family and was happy to do anything around the house. Christmas holidays were usually a camping trip to the beach.

Daniel Croke’s school years were unremarkable, his first job was as a shop assistant. He would later changed jobs regularly.  Daniel went on to marry and have two children, his first child was named Daniel John Croke jnr and his second son was named William Daniel Croke.

Daniel John Croke was a fantastic father and family man.  He passed away in 2014.

This website is a mark of respect to his memory as without him the Croke family as it is today would not exist. 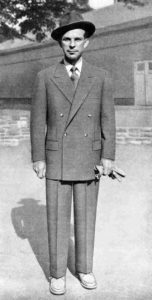